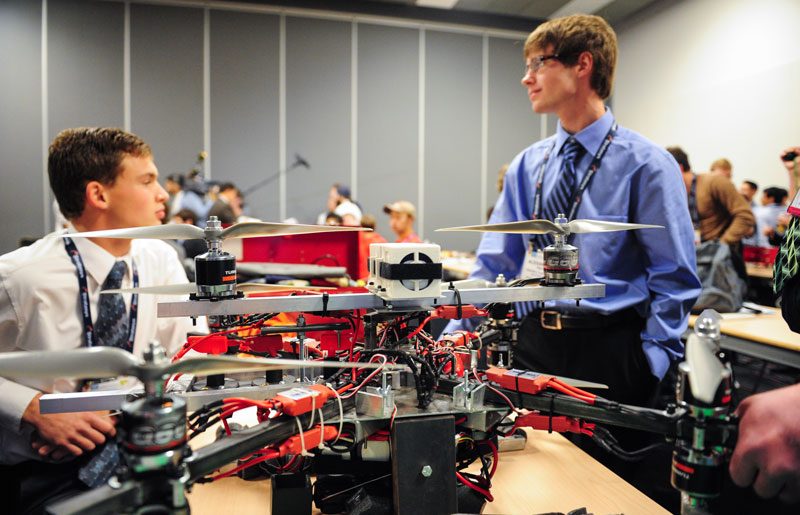 The engineering students had a mechanical showdown on Mars just before finals.

“This is pretty much where it’s at for engineering students at SMU.” Said Prasanna Balakrishnan, one of the students who built a mock Mars rover. Prasanna was one of five students who built Clementine, the robot who won the class-wide competition held at the Discovery Centre. On a simulated Mars terrain, different remote-controlled creations assembled a bridge, crossed a chasm and collected a ground sample. The fastest rover to complete the task won bragging rights, on top of the lessons that came along with the construction process.

“I learned more in this class than all of my other classes combined.” Said Talal Ikram, about Engineering Design Graphics 2 (ENGE2307). “It’s the actual designing – what engineers actually get to do. It’s pretty cool.” added fellow group member Dylan Doucette.

Students were given the same base materials, a sort of robot kit, and a budget of $20 they could use to buy additional supplies should they need it. “The robots had different ideas between them – none of the robots in the class were the same, even though we all started with the same kit.” said Prasanna, explaining that certain designs and ideas that were done before were off-limits. “Within the school, like other Design 2 classes, there are patents that students can’t copy.”

“There wasn’t one hardest part – it was everything. The bridge, the time limit – that’s where a lot of groups had trouble.” Said Talal, speaking to the difficulty of the project. This semester’s class saw all of the robots complete their task within the allotted time, which hasn’t always been the case in the past.

The group members all seemed to agree, that the class was demanding, but with a big payoff in terms of the skills they learned.  “If you go into the class knowing you’re going to have to work hard, you’re going to be able to get a lot out of it.” Said Talal. “Yeah, it’s a lot of work, but it’s so worth it.”